What is the role of the APOBEC3 proteins as evolutionary drivers of tumorigenesis and chemotherapy-resistance in bladder cancer?

The apolipoprotein B mRNA editing enzyme catalytic polypeptide-like 3 (APOBEC3) proteins are a group of seven cytidine deaminases (A3A, A3B, A3C, A3D, A3F, A3G, A3H). APOBEC3-induced deamination results in the conversion of cytidines (C) to uridines (U). We discovered that the APOBEC3-induced mutagenesis is clonally enriched in chemotherapy-treated urothelial carcinoma and that its shape the tumor's evolution of throughout its lifetime (Faltas et al. Nature Genetics, 2016). We are currently using several model systems to dissect the role of APOBEC3-induced mutagenesis in promoting genomic-instability and driving tumorigenesis and chemotherapy-resistance in urothelial carcinoma. (See Figure 1)

How can we develop new models of urothelial bladder cancer that are biologically and clinically-relevant?

Our lab is currently developing several new models of bladder cancer including transgenic animal models and patient-derived (xenograft and organoid) models. We are striving to create models that will allow us to answer real world clinical questions with a mechanistic depth. (See Figure 2)

What are the molecular determinants of response to CDK4/6 inhibition in urothelial cancer patients?

CDKN2A copy-number loss occurs in 41 % of bladder cancer patients. Deletion of this gene leads to disinhibition of the cyclin-dependent kinases 4 and 6, RB phosphorylation and faster G1/S transition. Our previous observations on the role of CDKN2A deletions in bladder cancer provided a biological rationale for an investigator-initiated window-of-opportunity clinical trial. In this trial, we are studying the effects of a small molecule CDK4/6 inhibitor in patients with bladder cancer. Our hypothesis is that targeting the cell cycle will act as a selective pressure that will steer the genetic evolution of bladder cancer and will alter the immune microenvironment. We are performing a co-clinical trial using patient-derived bladder cancer organoids to identify the molecular determinants of response to CDK4/6 inhibitors. (See Figure 3) 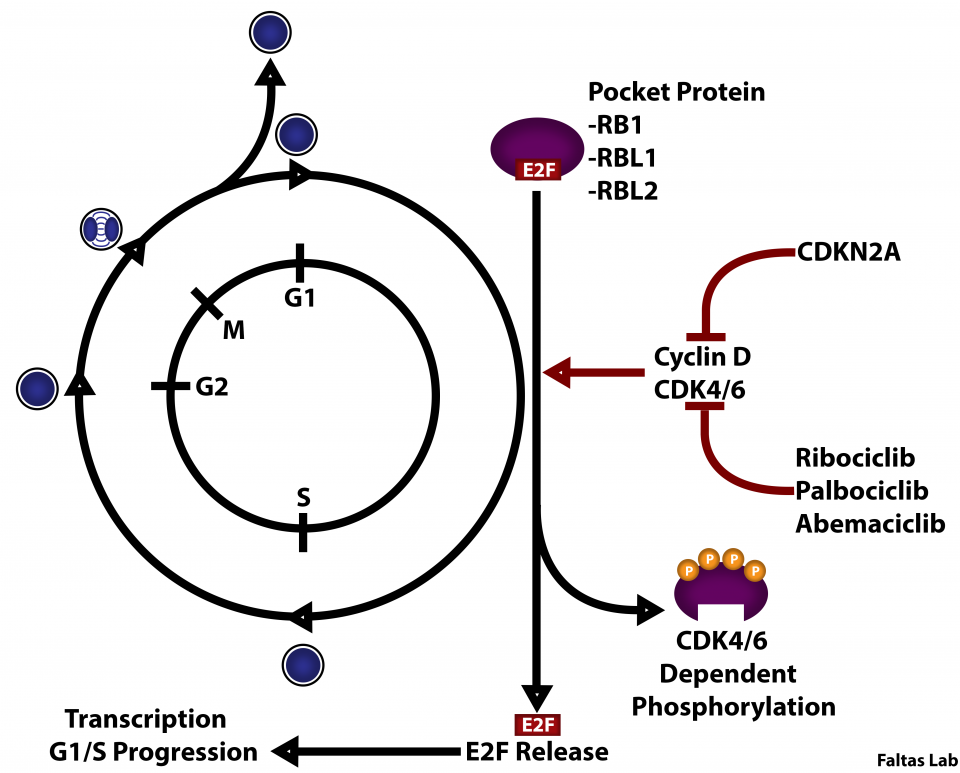