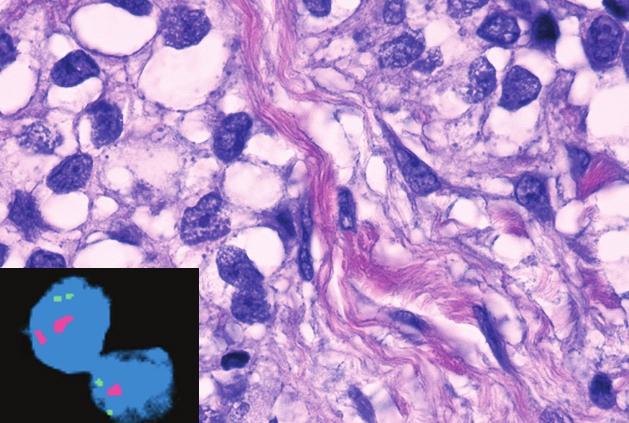 Urothelial cancer evolves at the genetic level over time and through treatment. These microscopic images show the differences in the number of copies of the CDKN2A gene (magenta color) as the tumor evolves from the primary bladder urothelial cancer (Top) to spread to the lymph node after treatment (Bottom). All images: Nature Genetics

Treatments for urothelial cancer are limited. Within months of the initial treatment, usually with platinum-containing chemotherapy, most patients will become resistant to treatment. Although immunotherapy has shown recent promise, there is no consistent cure for this chemotherapy-resistant state of the disease.

In their study, published Oct. 17 in Nature Genetics, investigators from Weill Cornell Medicine and the University of Trento discovered that urothelial cancer cells mutate following treatment with chemotherapy, and that these mutations provide these tumor cells with an evolutionary advantage to survive chemotherapy. The findings lay the foundation for building a framework to understand the biological basis for chemotherapy-resistance in bladder cancer, which may lead to improved diagnostics and treatments for this lethal disease.

"We wanted to understand how chemotherapy changes urothelial cancer and to do so we had to apply the principles of evolution," said co-first author Dr. Bishoy M. Faltas, an instructor in medicine at Weill Cornell Medicine and an oncologist in the Genitourinary Oncology Program in the Division of Hematology and Medical Oncology at Weill Cornell Medicine and NewYork-Presbyterian/Weill Cornell Medical Center. "We found that chemotherapy acts as a selection pressure favoring the survival of the fittest urothelial cancer cell clones. By understanding how these urothelial cancer clones evolve at the genetic level over time and through different selective pressures such as treatment, we are hoping to translate our findings to strategies that reverse or prevent the emergence of chemotherapy resistance in bladder cancer patients." 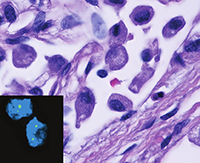 The investigators collected and analyzed the DNA sequences of all coding genes (using a technique called whole-exome sequencing) in tumor samples at various stages of the disease from 32 patients with advanced urothelial cancer who consented to participate in the study at Weill Cornell Medicine and NewYork-Presbyterian. Of those, 28 had developed metastatic urothelial cancer at the time of enrollment or at a later point during the course of the study; two patients consented to undergo rapid autopsies, conducted within six hours after death, enabling the researchers to collect samples of tumors from different body sites that capture the natural history of the tumors' evolution.

Researchers at the Caryl and Israel Englander Institute for Precision Medicine at Weill Cornell Medicine sequenced the DNA extracted from patients' tumor samples obtained at different time points through the disease course. The bioinformatic analysis was conducted at the University of Trento in Italy by co-first author Dr. Davide Prandi, a postdoctoral fellow, and co-senior author Dr. Francesca Demichelis, the principal investigator at the Laboratory of Computational Oncology at the university's Centre for Integrative Biology. The computational biologists compared the genetic sequences of the primary untreated and the chemotherapy-treated tumor cells from the same patients side by side, noting where the genetic mutations were the same and where they differed.

The researchers found that the primary untreated and advanced chemotherapy-resistant tumors didn't share the majority of mutations. Rather, as the tumor spread, it branched out and developed new mutations that were different from those in the primary tumor, and it appeared to happen very early during the disease's development. This finding has important clinical implications for developing targeted therapies, according to Dr. Faltas, because clinical genomic testing, which is typically performed only on a single tumor site (usually the primary untreated tumor), does not capture the entire repertoire of genetic changes that occur after chemotherapy treatment.

The investigators also found that two molecular pathways — the integrin signaling and the L1-cell adhesion molecule signaling pathways — particularly accumulated higher levels of mutations after chemotherapy. They believe that these pathways are potential targets for preventing or reversing chemotherapy resistance in urothelial cancer. Finally, the researchers studied the mechanisms underlying the mutational changes they observed in chemotherapy-resistant urothelial cancer. They found that chemotherapy-treated urothelial cancers have more mutations caused by a family of proteins called APOBECs which mutate single-stranded DNA. Because chemotherapy drugs introduce breaks in double-stranded DNA, leaving single strands dangling, the investigators postulate that the APOBECs bind to these overhanging single strands of DNA in urothelial tumor cells, thus causing an increase in mutations in chemotherapy-treated tumors.

This study exemplifies the "team-science" approach to answering an important biological question with important clinical implications. This may ultimately translate to precision medicine strategies for bladder cancer patients.

"Precision cancer care does not know any borders or geographic restrictions," said co-senior author Dr. Mark Rubin, director of the Englander Institute for Precision Medicine and the Homer T. Hirst III Professor of Oncology in Pathology at Weill Cornell Medicine, and director of the precision medicine program at Weill Cornell Medicine and NewYork-Presbyterian/Weill Cornell Medical Center. "Our collaboration between cancer physicians and laboratory scientists in New York and computational scientists in northern Italy reminds us that our problems are similar and by working together — sharing data and observations — we can improve how we take care of patients in New York, Trento and beyond."